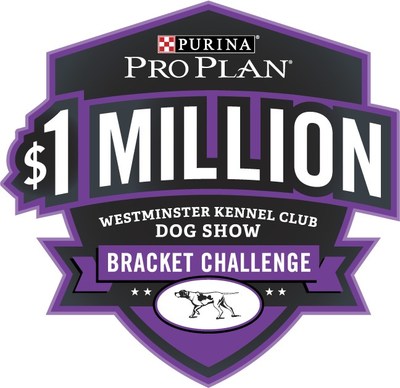 To have a shot at being the first-ever $1 Million winner in the game of "barketology," dog lovers and sports fans must start by creating their own bracket at www.dogshowbracket.com. Fans must select one winning breed from the Hound, Toy, Herding, Sporting, Working, Non-Sporting and Terrier groups. Then, they'll select their pick for overall "Best in Show" from those seven groups. In prior years, several bracket enthusiasts have correctly guessed up to six group winners, but the seven group winners AND "Best in Show" remains an elusive feat.

The last (and most enjoyable) step is to watch the Westminster Kennel Club Dog Show on FS1 on Feb. 10 and Feb. 11 at 7:30 p.m. ET to see how their picks stacked up. If their selections match the actual winners, they could win $1 Million, with the prize being split evenly among all verified winners.

"For thousands of Westminster watchers, the Pro Plan $1 Million Bracket Challenge allows them to get closer to the competition they love, and hopefully, see their favorites come out on top," said Gianna DeiSanti, Brand Director with Purina Pro Plan. "And for us, it's a way to show the power of what advanced nutrition can do, as many of the handlers of top dogs competing select Purina Pro Plan as their nutrition of choice."

Purina Pro Plan has a rich history in the sport of purebred dogs and has been the food of choice for elite dogs to excel through nutrition that performs1. Need proof? Twelve of the last 13 Westminster "Best in Show" winners have been fueled by Purina Pro Plan.*

Brackets can be submitted until Monday, Feb. 10 at 5:00pm ET, prior to the first broadcast of the show. Then, tune in on Feb. 10 and Feb. 11 at 7:30 p.m. ET on FS1 for live Westminster coverage and follow @ProPlan on Twitter and Instagram, using #WKCDogShow to join the conversation. For those who miss the action live, a one-hour Westminster highlights show will air on FOX on Sunday, Feb. 23 at noon in all time zones to recap top moments from the full competition.

For more information and Bracket rules, including a Dog Show 101 tutorial, visit www.dogshowbracket.com.

About the Bracket Challenge
NO PURCHASE NECESSARY. A PURCHASE WILL NOT INCREASE YOUR CHANCES OF WINNING. LEGAL RESIDENTS OF THE 50 UNITED STATES (D.C.), 18 YEARS AND OLDER. VOID WHERE PROHIBITED. Promotion consists of a Contest and a Sweepstakes; enter both by 2/10/20 at 5:00pm ET. For Official Rules, Sweepstakes odds disclosures, prize descriptions and all details, visit www.dogshowbracket.com. Sponsor: Nestlé Purina® PetCare Company, 1 Checkerboard Square, St. Louis, MO 63164

About Purina Pro Plan
Purina Pro Plan is a leader in the advanced nutrition category, with more than 70 formulas in dry and wet pet food to help meet a variety of needs. Its science is backed by 500 Purina scientists globally, including nutritionists, veterinarians and behaviorists, who continuously rethink what nutrition can do. It is also the food of choice for 12 of the past 13 Westminster Best in Show winners*. For more information, visit www.proplan.com or follow @ProPlan on Twitter, Instagram, or Facebook. The brand is manufactured by Nestlé Purina PetCare, which promotes responsible pet care, community involvement, and the positive bond between people and their pets. A premiere global manufacturer of pet products, Nestlé Purina PetCare is part of Swiss-based Nestlé S.A., a global leader in nutrition, health, and wellness.

About The Westminster Kennel Club
The Westminster Kennel Club, established in 1877, is America's oldest organization dedicated to the sport of purebred dogs. Westminster's influence has been felt for more than a century through its famous all-breed, benched dog show held annually in New York City. Each year, 205 dog breeds and varieties — highlighting preservation breeders and purpose-bred dogs — are eligible to compete in the dog show at Pier 94. Best of Breed winners advance to the Group and Best in Show competitions at Madison Square Garden. America's Dog Show has expanded into Westminster Week, which includes the Masters Agility Championship at Westminster and the Masters Obedience Championship at Westminster, both held at Pier 94. Nearly 3,000 dogs entered from around the world compete in these events, making Westminster Week like no other. Westminster. There's only one.(R) Follow us, @WKCDOGS, or visit: westminsterkennelclub.org.