Press Releases
And The Winner Is… The Wire Fox Terrier!
King wins "Best In Show" becoming the 12th Westminster Kennel Club Dog Show Champion in 13 Years to be fueled by Purina Pro Plan 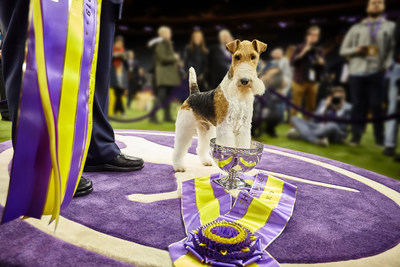 Purina Pro Plan has a long, rich history in conformation. It is the food of choice for 95 of the top 100 American Kennel Club (AKC) All Breed Show Champions1, and in addition to the "Best In Show" winner from the Terrier Group the other six Westminster Group winners are also Purina Pro Plan-fed2.

"Pro Plan continues to be the food of choice of handlers and owners for many of the top competitors in conformation, helping them perform at their very best," said Gianna DeiSanti, Brand Director with Purina Pro Plan. "We're proud to play a role in these champions' journeys to 'Best In Show,' and we congratulate Gabriel and King on their well-deserved success."

With more than 70 formulas across four specialized nutritional platforms to help meet a variety of needs, Purina Pro Plan is a leader in the performance nutrition category. Its science is backed by 500 Purina scientists, including nutritionists, veterinarians and behaviorists globally who continuously rethink what nutrition can do.

"King eats Purina Pro Plan Focus Sensitive Skin and Stomach Salmon and Rice formula because it's the only food that keeps his skin and coat healthy while giving him the energy to perform like the champion he was tonight," said Rangel.

About Purina Pro Plan:
Purina Pro Plan is the food of choice for 12 of the past 13 Westminster Best in Show winners². Our goal is to give your dog the nutrition to be his absolute best, helping him to be energetic and resilient, while maintaining an ideal body condition, healthy skin, and a stunning coat.  Because being the best he can be means something different for every dog, our wide range of dry and wet foods, sold exclusively at pet specialty retailers and online, can be found in four specialized categories formulated for a dog's unique needs. For more information, visit www.proplan.com or follow @ProPlan on Twitter, Instagram, or Facebook. The brand is manufactured by Nestlé Purina PetCare, which promotes responsible pet care, humane education, community involvement, and the positive bond between people and their pets. A premiere global manufacturer of pet products, Nestlé Purina PetCare is part of Swiss-based Nestlé S.A., a global leader in nutrition, health, and wellness.

About The Westminster Kennel Club:
The Westminster Kennel Club is America's oldest organization dedicated to the sport of purebred dogs. Established in 1877, Westminster's influence has been felt for more than a century through its famous all-breed, benched dog show held every year in New York City. Today 204 breeds and varieties of dogs compete in Best of Breed judging at Piers 92/94 with the winners advancing to Group and Best in Show competitions at Madison Square Garden. America's dog show has expanded into Westminster Week which includes the Masters Agility Championship at Westminster and the Masters Obedience Championship at Westminster, both held at Pier 94. More than 3,000 dogs entered from around the world compete in these events, making Westminster Week like no other. Westminster. There's only one. (R)  Follow us @WKCDOGS or visit: westminsterkennelclub.org.

¹Dog News Magazine Top 100 Dogs based on AKC All-Breed Competition and RBIS through 12/31/18.
2The handler or owners of these champions may have received Purina Pro Plan dog food as Purina ambassadors.